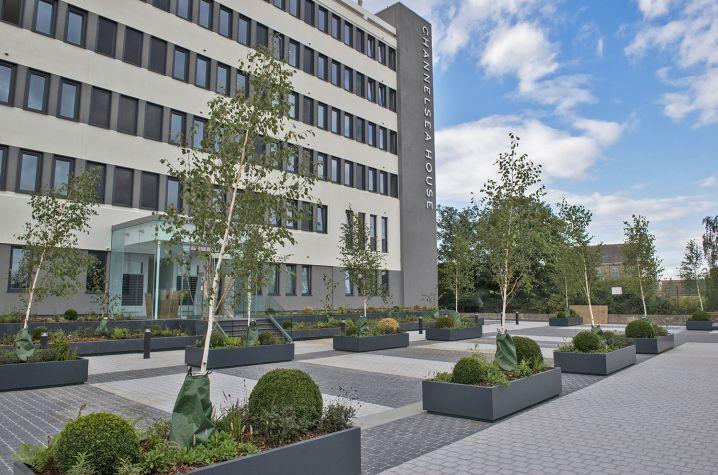 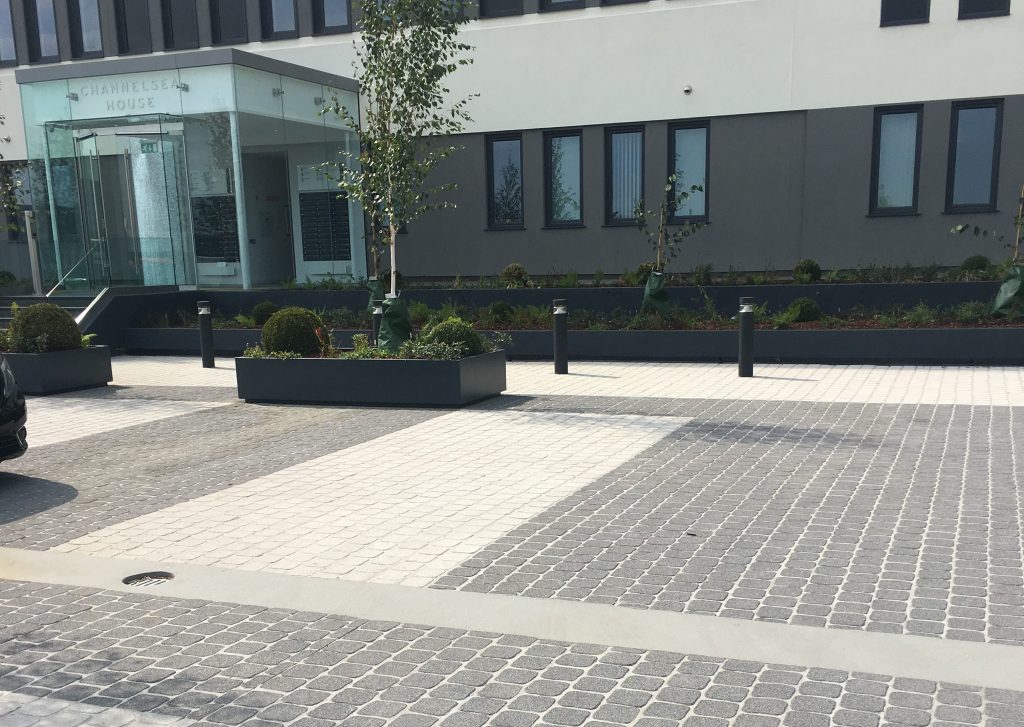 Matthew Savage, Head of Commercial at IDM Properties, was impressed by the Vintage Style Resin Cobblestones which were proposed when they requested options for a ‘decorative resin surface’.

This was part of a redesign and renovation of a 1960’s office block into residential units during the Channelsea House project in 2016.

“Gaysha are quite simply experts when it comes to the supply and works associated with resin surface finishes.”

The Right Choice And Perfect Timing To Ensure Completion

“They know precisely the best choices to make, which saves me time. And especially when they are usually involved at the stressful end of a project, when you need to complete to hit the various deadlines, they are certainly a safe bet.”

“Not only did they deploy rapidly, they use their initiative to overcome the usual problems of site clutter. So that saves me having to get involved to resolve issues between contractors.” 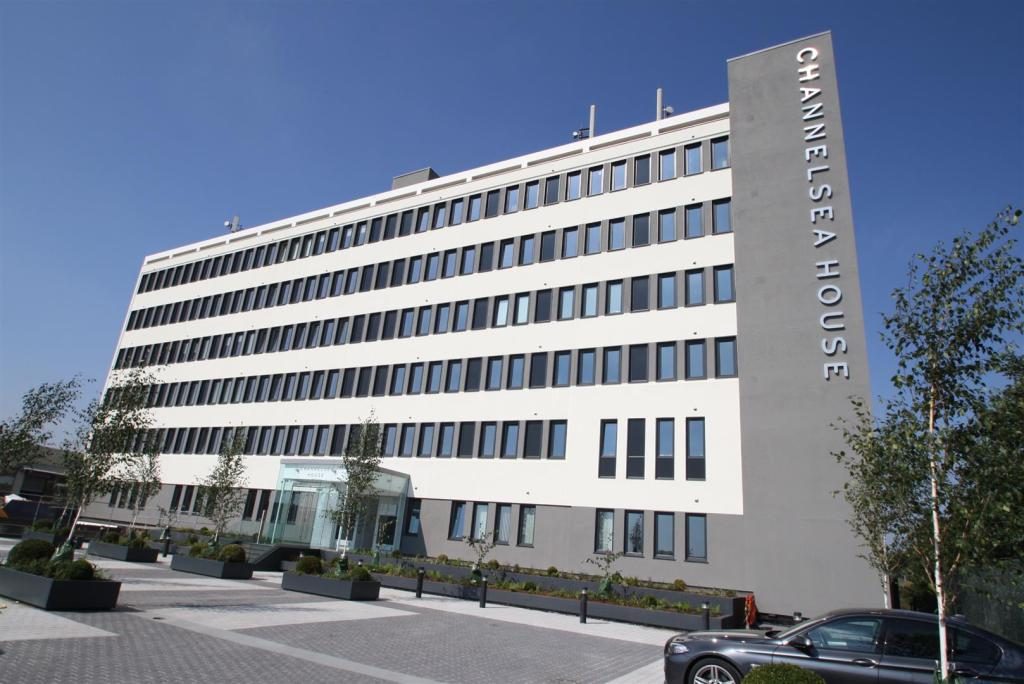 Ready To Go Within 30 Minutes

“I also love the products they work with. The contrasting colours and professional finish looks absolutely fantastic. And within 30 minutes, you can walk or even drive on the surface because it’s ready to go incredibly quickly.”

“We couldn’t have asked for more of a dream project with which to launch our resin cobblestones. The building façade, entrance and new signage all look fantastic – combined with the beautiful garden area this is going to be a really desirable development” 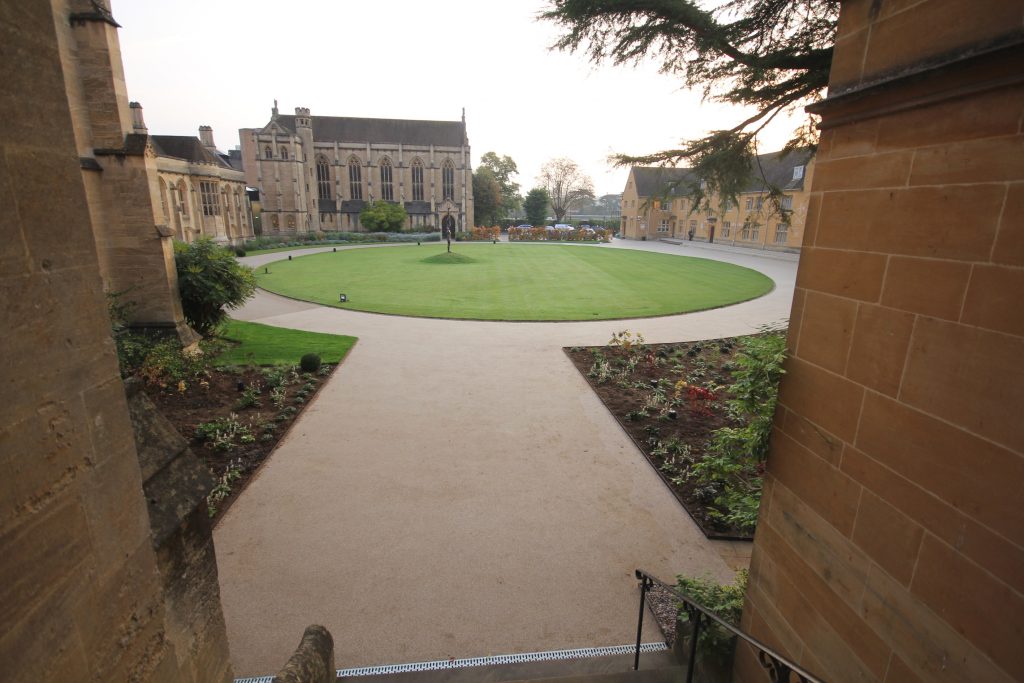 The appearance of a quintessential seat of learning, an Oxford college where an architecturally acclaimed new structure stands alongside elegant Victorian elevations, was being let down by its hard landscaping – until a sustainable new driveway surface, featuring Clearmac paving, was successfully completed this summer.

The work to upgrade the striking circular driveway which fronts Mansfield College has been undertaken by Beard Construction, with the assistance of Dartford based Gaysha Limited. The college’s own Maintenance Department oversaw the contract, the first phase of which was completed two years ago.

Prior to this project the surface to the driveway, which is used by countless pedestrians as well as cars and delivery vehicles, had become uneven and unsightly, with rutted patches of subsoil showing amongst the remaining, badly potholed tarmac.

Crucially, the Clearmac resin bound paving specified for the contract encapsulates a light quartz aggregate, now presenting a pristine appearance that will be both hardwearing and also sustainable. The constituent materials offering a low environmental impact, while also being water permeable to Sustainable Drainage System (SUDS) standards.

Once the remains of the old tarmac had been removed and the formation level prepared, the contractor initially laid a layer of open-grain tarmac. This was then followed by the 20mm thick wearing course of Clearmac, which is itself permeable to rainwater.

The college’s Maintenance Manager, Tony Berezny, commented:  “The contract was carried out in two main stages, respecting the college’s continued activities throughout the year. It has made a very real improvement to not just the appearance or the frontage to Mansfield College, but also the comfort and safety of those using the driveway.”

Available throughout the country from Gaysha, cold applied, Clearmac can be supplied in any colour desired to match a client’s aspirations for either indoor or outdoor locations. The surface achieved is resistant to not just the elements and UV radiation, but also the effect of fuel spillages, oil and commonly used solvents.

Clearmac can carry foot traffic within four hours of laying, while different degrees of slip resistance can be created by varying the aggregate mix. The freedom to select different colours can also be exploited for creative effect or to help designate areas for reasons of safety, parking and other uses. 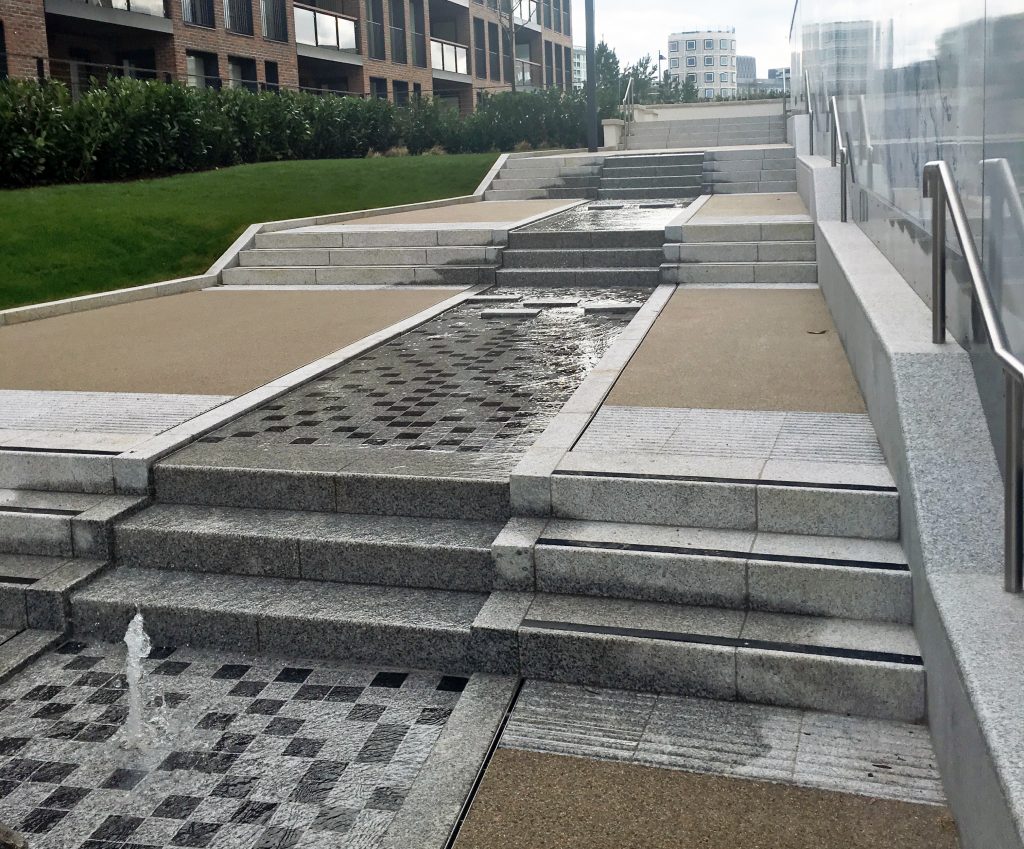 Nigel Farnan, Project Manager for Elite Landscapes, appreciates the simplicity of getting a superb surface finish for a set rate. Having worked with Gaysha for 12 years, he is very well placed to vouch for their quality and great value:

“I save a great deal of time working with Gaysha. Because we have a set-rate, it takes a matter of moments to figure out what the final bill will be.”

“And they work with particularly flexible resin-bound products. They look fantastic in some of the prestigious riverside block projects we do in London.”

“The product can be walked or driven upon pretty much straight away. It’s light which is ideal for roofing finishes where weight is a challenge. And it only needs a thin layer and is flexible enough to cover even concrete or tarmac.”

A Contractor I Can Rely On

“They get on with it without a fuss. Because we’ve worked with them for so many years, I know how flexible they are. They still completed on time recently for example when I had several trades on site at once for a project which needed completion within 10 days.”

“And when you consider that their role in a project is often the final part prior to completion, they simply got on with it, working around the congestion challenges with an extremely tight deadline.”

Would I Recommend Them? Absolutely

“They are a great team of people. Always well prepared. Flexible on-site. They work around problems that would stop others until an intervention.”

“I feel far more relaxed when their team is on the job as it allows me to focus on other issues without the worry. I strongly recommend them.”

“We go back a long way now, and Nigel and his team are a great bunch of people to work with. That relationship has developed so that we work extremely well together. They know the limitations we work within, but equally, we know precisely what they want and how they work so projects are completed to the satisfaction of all.” 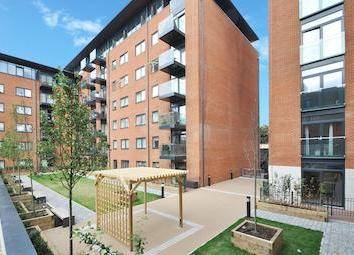 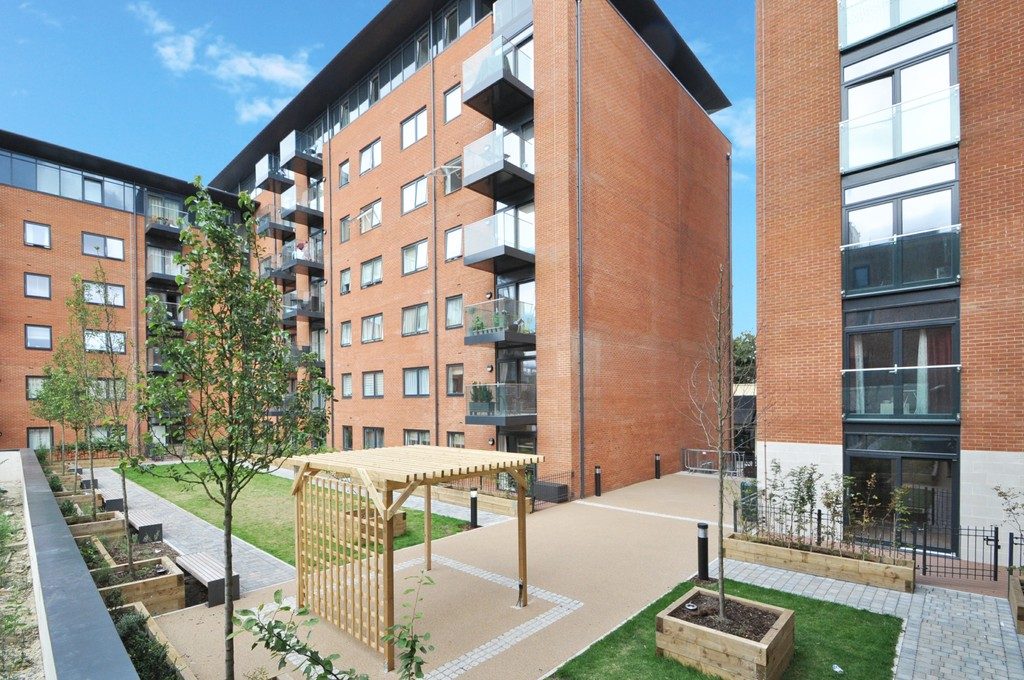 Edward Stirling, the Project Surveyor for Foundation Developments, has worked with Gaysha on a number of projects, most recently a 400 square metre residential development at Ringers Road in Bromley.

“The resin bound product was used because it’s a great looking product, ideal when its porous nature aids drainage. Together with their excellent organisation, they make a great team.”

“Having tried apparently cheaper contractors, I prefer Gaysha because they turn up on time, reschedule rapidly when for example the grounds are not ready, so you don’t get those additional costs others charge.”

“And that’s how I first came across them. An appointed contractor simply didn’t have the available labour at the last minute, and as I now know, true to form, Gaysha stepped in and saved the day.”

“One of Gaysha’s key strengths is their ability to just get on with it without making a fuss. Because they are usually last in before project completion, it’s vital they take away problems and stress from me so I can focus on other things.”

“There are all manner of issues, for example the area not being ready yet, part of it being covered by plant. As far as my clients’ concerned, the areas are available and they want them completed as quickly as possible. This is where Gaysha stands out against other companies. We never have any issues with their time management, they just get on with it. They may not be rock-bottom on price, but they allow for all the general issues you have on site, especially with hard landscaping where you do have delays.”

“From my point of view, I know they will find a way to continue, or if they have to reschedule, I can rely on them to return quickly to get the job done.”

“They are an important factor in getting the job completed. When needed, they will find a way around hitting deadlines, even though many of the barriers are created by others.”

“Eddie is a great no nonsense guy to work with. Whenever we hit a snag, he steps in and helps us work around the issue together. We make a great team.” 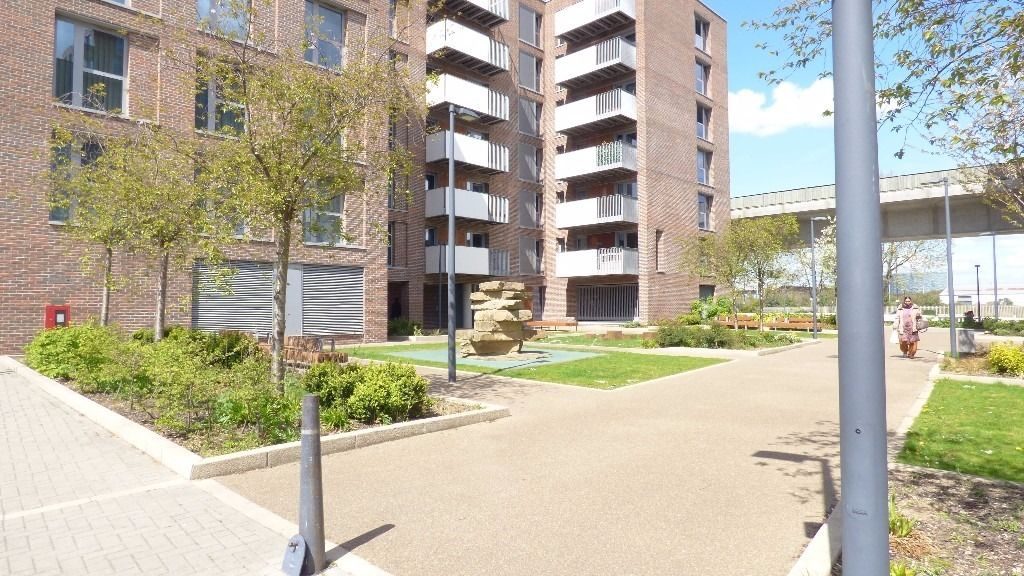 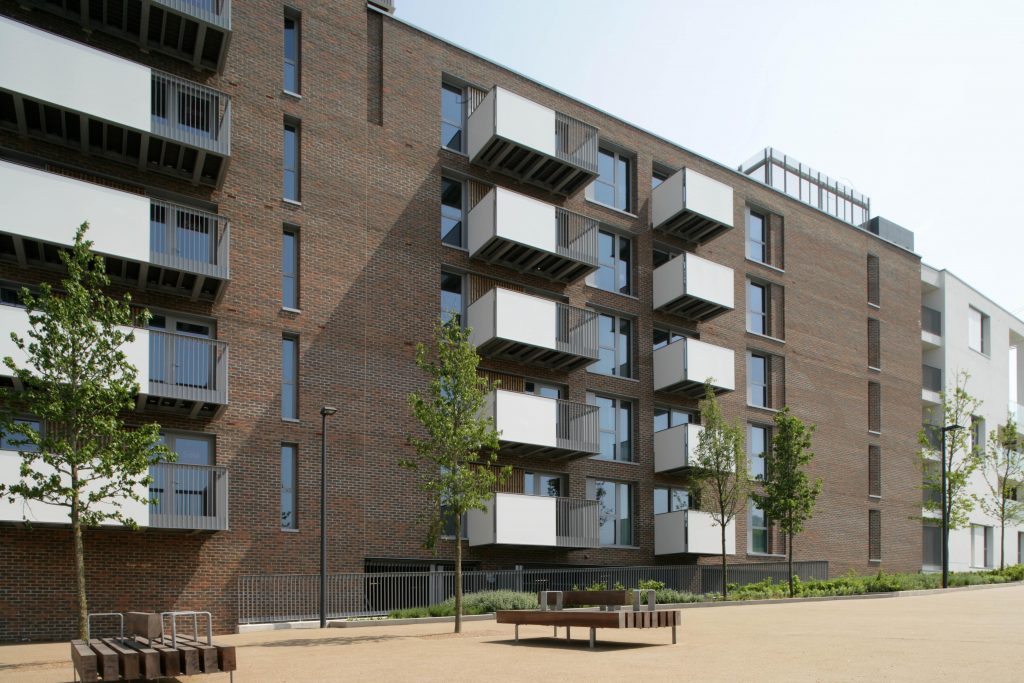 Dieter Bierbaumer, the Contracts Manager at UKD Groundworks, has worked with Gaysha on every single project since the company sprung to life 12 years ago.

“Because they are deployed at the critical final handover phase of a project, I have come to rely upon Gaysha because they deliver a great product on time.

“For example, the recent residential, 7-tower block scheme in Silvertown. In fact, the resin-bound gravel on this scheme became a striking feature. It’s often better than paving because you can cover a large area, with an even surface, and chose a variety of attractive colours.”

“Importantly, an added benefit over traditional paving is the lead time. To the point where we replaced some of the planned paving on this project with resin bound gravel.

“The result on this project was fantastic. It became a feature on the pathways and the mutual skateboard and play area of the development.”

Over a 4 Year Project, They Could Be Relied Upon To Deliver

“Gaysha were deployed as each block within the development were completed over a 4 year period. Having worked with them for 12 years, I chose them for the lead time which can vary from responding next day to a fortnight for the larger projects.

“It’s this speed of response and just as importantly on the rare occasion there will be a delay, honest communication so you know where you stand that I have come to depend upon.”

On Time, On Budget Consistency

“They certainly help from a budgetary perspective. I can rely upon them to deliver ahead of or on time, which means we can hand things over as complete when promised.”

“They are always prepared, having pre-visited the site and meticulously co-ordinated material delivery before their people are due on site.”

“They were originally recommended to me, and in turn, I would recommend them without hesitation”

“Dieter is a pleasure to work with. We now know what he wants and how he works, and vice versa. This results in a great team effort in which he is a vital component. I have enjoyed working with him over the years, and look forward to many more.” 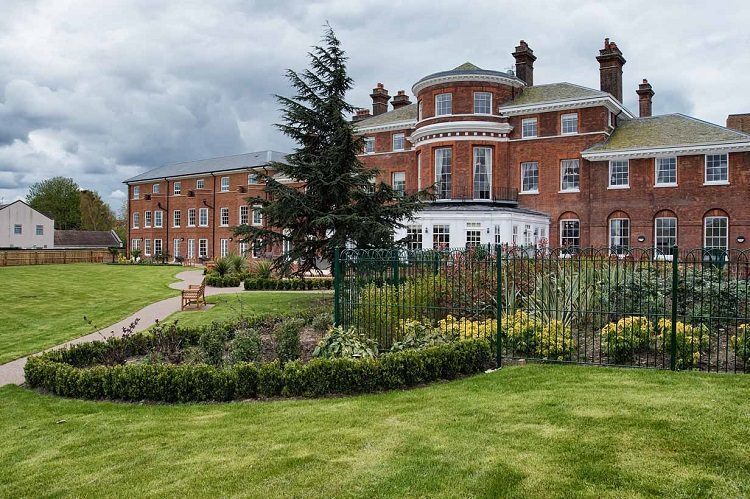 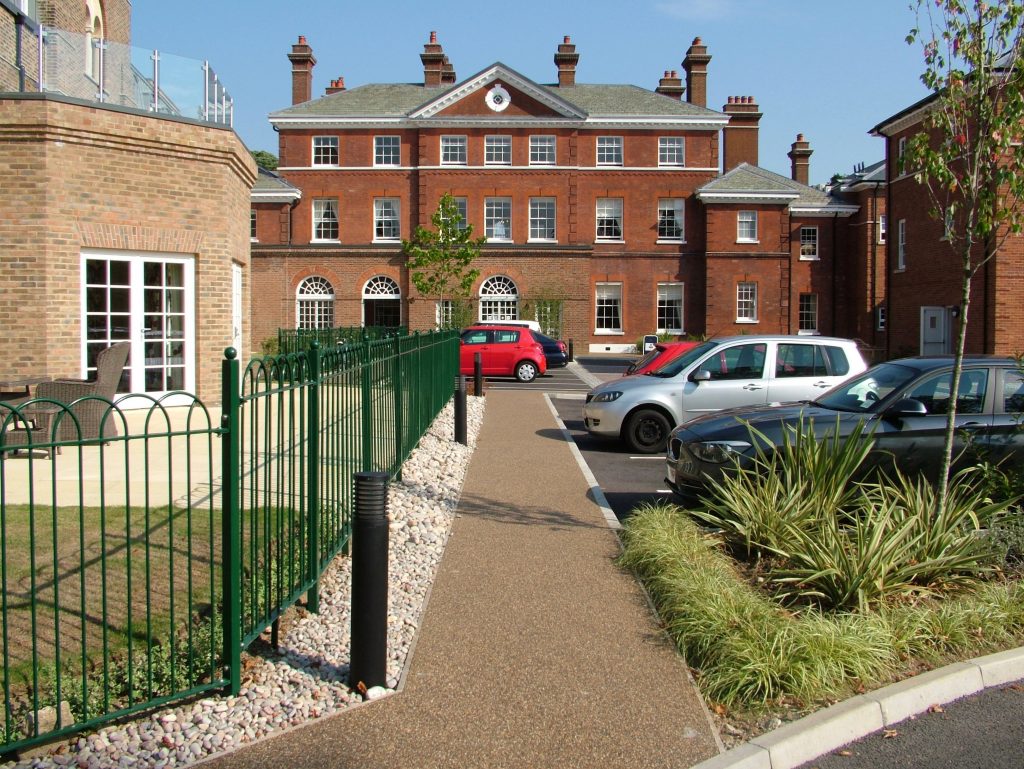 Josef Russell is the commercial director at Ross Projects, responsible for an extensive 7-month landscaping project at a care home called Home of Compassion in Kingston-On-Thames.

“This was an exclusive development which demanded a quality finish. Residents pay a premium price for this stunning property, and we needed a top-drawer product, well finished.”

“And this was certainly delivered by Gaysha.”

“Having been there and done it with Gaysha, an awful lot of the stress is removed from any project I work with them on, and this case was no different.

“It starts with great communication with their back office. Everything is meticulously planned, starting with site visits ahead of the project, timely delivery of all the materials to the right locations prior to commencement, and the reliability, speed and quality of the finish when their people arrive to deliver.” 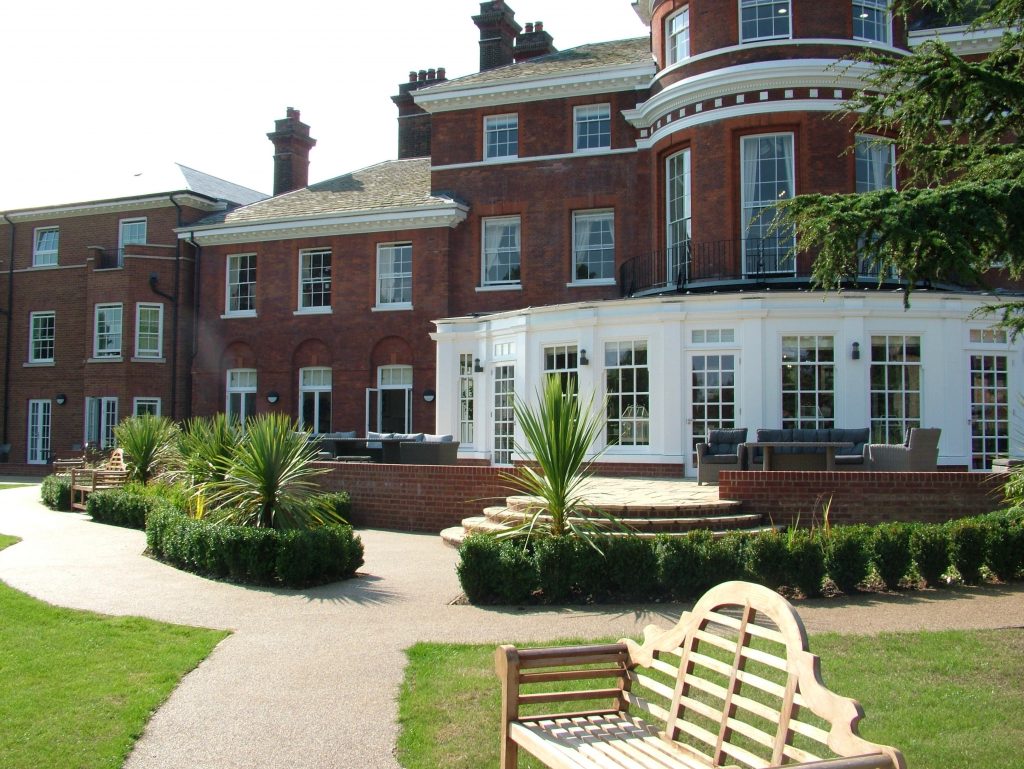 Everything Went According To Plan

“In some respects, the story with this project is that there’s no story with the elements that Gaysha were involved in.

“They stuck to their schedule, prepared very well, and executed perfectly. In some ways, I’d like to report on how they were able to overcome the usual challenges and work around it expertly like they have before, but on this project, there was simply no drama.

“Even down to the cost. We paid precisely what was quoted, and there were no variances or unexpected extras.

“The client was absolutely delighted with the finished product which looked superb.”

“It’s great to work with Josef, and on this particular project, he certainly helped to make our role less of a challenge. The groundworks was prepped carefully, and he ensured there were no unexpected obstacles to a particularly smooth project. And that’s down to Josef and his careful planning.”